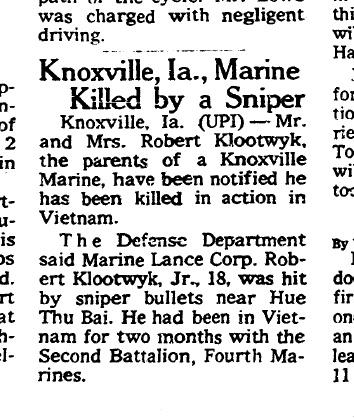 Pleasantville - Funeral services for Darlene Klootwyk of Pleasantville were held on Monday, Nov. 22, 2010 at the Mason Funeral Home with Pastor Jeff Flagg officiating. Burial followed in Graceland Cemetery. Musical selections were shared by Midge Brooks, organist and Bonnie Crook & Mona Hansaker, vocalist, singing "How Great Thou Art". A CD of "On the Wing's of Dove" was also shared. Those serving as casket bearers were; Arland Jolly, Roger Mott, David Baldwin, Ralph Klootwyk, Larry Bybee and Dennis McNearney.
Phyllis Darlene Klootwyk was born on June 25, 1926, at the family home in Knoxville to Henry Ivan McVay and Ethel Imagene (Smith) McVay.
As a child, Darlene worked for the North End Grocery after school and on weekends. She graduated from the Knoxville High School with the class of 1944. Following graduation Darlene worked for the Bellamy Telephone Company until she was united in marriage to Robert Arthur Klootwyk at the First United Methodist Church in Knoxville on June 29, 1947. Darlene and Robert lived in Knoxville until making their home on a farm outside of Pleasantville in 1970. They then moved to town in later years.
Darlene was very active in the community; she worked at the Pleasantville Senior Center, taught Sunday School, was on the Greenwood Cemetery Board and helped with the food pantry. She was a member of the First United Methodist Church and later joined St. Paul's United Methodist Church after moving to Pleasantville. Darlene was also a member of the UMW and the American Legion Ladies Auxiliary.
She enjoyed doing crafts, cross stitching and cooking and canning from her own garden. She also cherished the time spent with her grandkids and attending their activities.
Darlene passed away on Friday, Nov. 19, 2010 at her home at the age of 84 years.
She was preceded in death by her parents; her husband, Robert; a son, Lance Corporal Robert Ivan Klootwyk; and a brother, Richard McVay.
She is survived by her daughters, Lila Jean (Robert) Fast of Knoxville, Freda Darlene (Brent) Hoyt of Pleasantville; grandchildren, David Edward Fast of Urbandale, Elizabeth Darlene Hoyt and Kaylene Marie Hoyt of Pleasantville.
For those desiring, memorial contributions may be made to St. Paul's United Methodist Church, the Pleasantville Senior Center, or Hospice of Central Iowa. Online condolences may be left at bertrandfuneralhomes.com